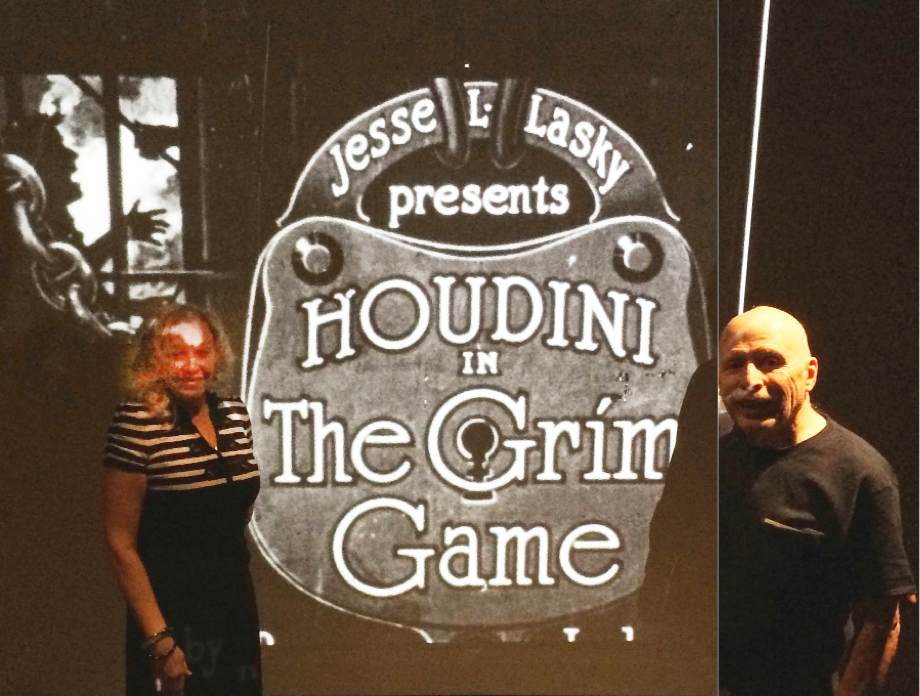 Two of our people who were a key to opening that lock!
Our first private screening of the restored film © 2014 Houdini Museum

Houdini's movie "The Grim Game" made in 1919, has been unavailable until now and has been considered lost by film historians. Brookz commented, "The only complete copy of the film was hidden in the collection of juggler, magician, Houdini collector Larry Weeks. I have known Larry since I was in my early teens. Larry trusted us and knew we would never do any thing that was not in his best interest. He knew with us involved it would be done in a proper way to protect his legacy. We even put together and host his web site http://larryweeks.info

Dorothy and Dick had kept a friendly relationship with Larry Weeks and that is what helped to make this happen. We had even throgh the years bought magic and Houdini props from Larry. Larry Weeks called himself "Houdini's biggest fan" and amassed a Houdini collection. He had the only known print of Houdini's lost film, "The Grim Game." He was known to show it at various occasions in his life time. It is the best of Houdini's five films. Dick Brookz commented "Over the years Larry invited us to see the film on two occasions. He found it odd and incomprehensible when I, Dick Brookz, told him that some magicians berated him for hoarding the movie that he preserved over the years at great personal cost." Dietrich added "Our movie contact for negotiations, was a sometime film producer who was an acquantince for over 20 years. He would be our contact to Turner Classic Movies. When in town he would visit The Houdini Museum as or guest. In April of 2014 he made another one of his occasional visits to The Houdini Museum in Scranton. At that meeting we decided to tell him about the whereabouts of "The Grim Game" and our long time friendship with Larry Weeks The entire film industry had considered the Grim Game as lost, and at the time the producer had no knowledge about the film or of its existance of the film. We called Larry Weeks on his private number and told him about our desire to have the film restored. It took several calls and over two weeks to convince Larry to meet with the go-between. Larry finally agreed and gave us permission to pass along Larry's number. A meeting was set up and he arranged to acquire the film for Turner Classic Movies who he done a job for. He then put the pieces together to pick up the film, have a company restore it and Turner Classic paid to also add an original movie score. The wonderful thing is that the film content is complete, although it required a lot of work by the restoration company. Just prior to this time we had spoken with Larry several times and he informed us of his rapidly diminishing health so time was of the essence. The deal was made!" The last time we spoke to Larry after the deal he said to us "Thanks, enjoy the film. The next time you will see me I will be in a box!" Larry Weeks died October 13, 2014, before the public would get news of the acquisition on January 23, 2015. Many years ago Larry Weeks had bought a plot in the same cemetery as close as possible to Houdini and is buried there.

The restored film has a musical score composed by Brane Zivkovic an award winning film, television, and theatre composer. This was all done with financial help from Turner Classic Movies, who premiered it as the climax at the 2015 4 day TCM Classic Film Festival Sunday, March 29, 2015, in Hollywood to resounding praise and approval. It was the finale of the event. It may be scheduled to be shown in New York City, and the in Scranton, Pennsylvaina, where Houdini performend and home of The Houdini Museum, "The Only Building in the World dedicated to Houdini."

Dietrich continued, "We are so proud to have accomplished this. To know that essentially every magician in the world big and small, will get the thrill of viewing this wonderful Houdini movie because of us. This includes future magicians for all time, as well as millions of non magicians. It was our goal all these years to get this to someone who would release it to the public and not hoard in their cellar or a back room somewhere. The Houdini Museum located in Scranton, PA is the only building in the world dedicated to Houdini. It has been put together by well known professional magicians Dorothy Dietrich and Dick Brookz. The Houdini Museum has also taken on the responsibility of taking care of the abandoned Houdini Grave site, and recently replaced Houdini's missing bust that was destroyed 40 years ago by vandals. They recently have gotten The Society of American Magicians to agree to help with the upkeep of Houdini's grave site. http://houdini.org

Dorothy Dietrich's considered the leading female magician & escape artist in the world having been called "the First Lady of Magic," & "The Female Houdini." She's appeared in countless Television specials including "You Asked For It", a Bill Cosby Special, Montel Williams, "The Tomorrow Show", "Atlantic City Alive", "Just For The Record, the Best Of Everything", "Evening Magazine". etc. She was Special Guest Star in HBO's "The World's Greatest Escapes," costarring movie legend Tony Curtis, in which she escaped hanging from the bottom of a parachute ride hundreds of feet in the air while hanging from a singe piece of rope set on fire & she's the only women in history to accomplish The Jinxed Bullet Catch in the mouth, the one stunt Houdini backed out of. The stunt has killed over 13 men & injured many others. This was done at Resorts International in Atlantic City. Both stand as world records to this day. When not doing crazy stunts such as these she travels with a magic show that features doves, a duck, a rabbit & two pet poodles. When in her home town of Scranton she appears on a regular basis on stage of The Houdini Museum. She is also in great demand as a public speaker. http://dorothydietrich.com


Dick Brookz (http://dickbrookz.com ) has been a professional magician his entire life. He has fronted for Bobby Darin, Jack Jones, Neil Sedaka at performed at such venues as #1 Fifth Ave, The Rainbow Grill, The Americana Hotel and Casino in Puerto Rico, Aruba Hotel and Casino, etc. For a while in his spare time he wrote songs, one that became a "bubble gum" hit in the mid-west, "Powerhouse" that ended up being the theme sone for the candy bar of the same name. Dick Brooks owned The Magic Towne House on the affluent Upper East Side of Manhattan that was an incubator for many of todays top magicians. Dick Brookz also searched and pulled Brother Theodore, whose career had waned, out of retirement in the late 1970's to do several seasons of special midnight performances. This helped to bring him back to prominence. This resulted in a resurgence of interest in Brother Theodore that brought Brother Theodore success in his later years. The show was a huge success and continued for several years. This led to Theodore appearing on The Tom Snyder Tomorrow Show, The David Letterman Show, and a long series of TV and movie appearances. An ad for Theodore at the Magic Towne House ad that appeared in local New York newspapers such as the Village Voice and The New York Post can be found at http://www.shockcinemamagazine.com/brother.html

Pictures at Link to "The Grim Game" posters HOUDINI MUSEUM FUND
We need your help in supporting our historic projects! We cannot continue alone. We need your help. We are a 501 C-3 Non profit. All donations are tax deductible.

BOOKMARK THIS SITE. THERE ARE ALWAYS NEW ITEMS BEING ADDED!


Back to top of this page.
(Jump to Recent Harry Houdini News & Contents list)

One Page description of major attractions in the Pocono-Poconos-Scranton area.
Go to

Add a Free link to the Fun Guide on your site.
Go to

Go to over 200 Scranton & Pocono Hotels & Restaurants listed by area and town.
Go to

Comprehensive detailed list of the BEST POCONO LODGING by area.
Go to

Comprehensive list of places to EAT by area.
Go to

Learn about some of the Magicians who make this possible.

Google links to how Dorothy Dietrich follows in Harry Houdini's footsteps as investigator of "psychics" who claim to contact your dead relatives or even Harry Houdini. Back to top of this Harry Houdini page.
(Jump to Recent Harry Houdini Museum News & Contents list)

The best place for birthday parties of all ages in Scranton, PA |