During the october Halloween season the Harry Houdini Museum has two seance events.Ę

Our psychic paranormalist presentation, "Haunted! Mind Mysteries & THE Beyond."

Our yealy famous Halloween Harry Houdini seance tribute both by invitation at our facility, and on the web,Ę we are asking everyone to attempt to contact Harry Houdini sometime during Halloween for the 24 hours of October 31st and email us with any results and lack of results. No kooks please, this is a serious Halloween test and tribute.

Ę Chosen as one of the "7 Wonders of the Web"

Here is her original release when she was preparing to do the seance. 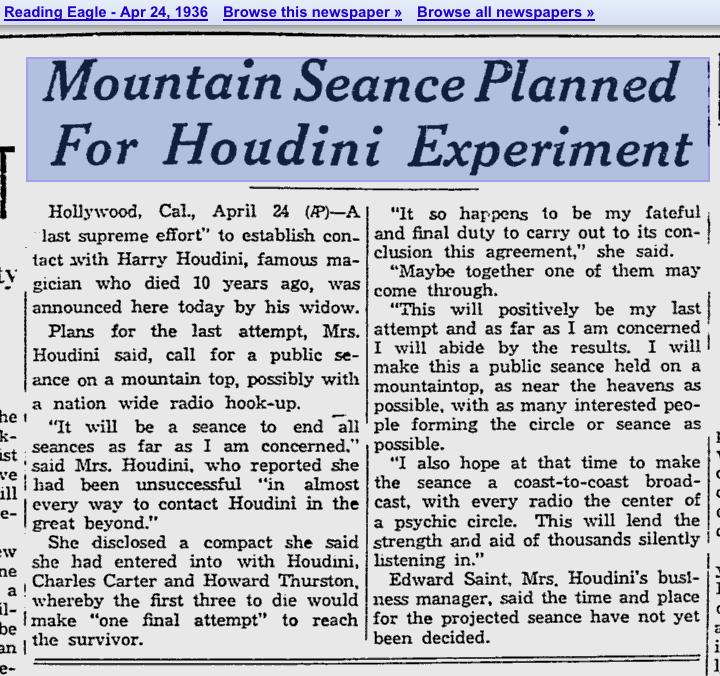 The photo shows some of Magic's most famous figures at a New York "Halloween Harry Houdini Seance." Although these have been called "seances" by many, it was really meant as a scientific test between Harry Houdini, his wife Bess Houdini and friends.

Seen in this photo are
1) Magic author and editorĘ Byron Wells.
2) Long lost friend Solomon Cohen (where are you?)
3) Famous author Walter B. Gibson, author of "The Shadow," Harry Houdini biographer, ghost writer, confidant of Harry Houdini and his wife Bess Houdini. Before he died he asked Dorothy Dietrich to carry on the tradition of the Halloween yearly Seancetributes toĘ Harry HoudiniĘ called by manyĘ "seances."
4) America's leading female magician and anĘ expert on Houdini, Dorothy Dietrich.
5) Milbourne Christopher, magic historian, and biographer of Houdini who attended most of theĘ New York "Halloween Harry Houdini Seances" at The Magic Towne House before he passed away.
Please note the NYC Mayor's Halloween Magic Week proclamation above Walter and Dorothy's head.

Go to Articles about past "Halloween Harry Houdini Seances"

To order a Harry T-Shirt.

Houdini Museum Memberships & Donations & Volunteers.
A GREAT NEW BOOK ABOUT HOUDINI!!!Ę CalledĘ "Houdini!!!" and is written by a Pulitzer Prize winning author who knows magic and magicians as well, Kenneth Silverman. A giant work with 150 pictures as well. It will retail for $35 and we expect it to sell out. We have ours reserved and are taking orders NOW!!! Send $32.50 plus $5 postage and handling in US or appropriate postage for non US destinations. Don't miss this. Send to Houdini Museum, 1433 N. Main Ave., Scranton PA 18508

Tour 4 of Scranton. A tour of the old coal mining area.
Go toĘ

Laws in PA. protecting consumers and entertainers such as bands, magicians, etc. from fraud and swindles by agents and bookers.
Go toĘ

(links)local hotels, local museums, more Houdini links, CityLink USA, etc. All with Web Site links
© 1993-2005 Ęby The Houdini Museum. No part of any of this document may be reproduced in any form, without written permission.Ę The graphics have been retouched, computer enhanced and resized by the authors.

© 1993 - by magicusa. Except for reviews, no part of any of this document may be reproduced in any form, without written permission by the authors.Ę The graphics have been retouched, computer enhanced and resized by the authors. Here is our email address.Ę We are more likely to get it if you put the subject in Caps.