People sometime ask us our opinion of Dunninger. This article along with others appeared when it appears Dunninger stopped payments to his wife. She was it is our understanding not his wife by formal ceremony, but she was granted a marriage on a common law judgement. What follows is the exact quotes from the article unchanged. This is from a scrap book kept by Rose Bonanno who lived in Houdini's home for many years after he died.

The article goes on to relate how Joe claimed to be on such friendly relations with Houdini - codes, etc., but this was debunked by Chrystal who said: "I am informed that Houdini specifically bequeathed his possessions to his brother..Hardeen. My husband's name was not even mentioned in the will."

This flairup between the dunningers in New York City should clarify one and for all the claims made by Joe over a period of 20 years -- his claims that he was a bosom friend of Houdini, had a code and Lord knows what else.

More of our and others opinion on this follows. We do not believe they were close friends since we and others we know have seen but one picture of them in the same picture.
After being online many years one was recently sent to us by a member of the Dunninger family, of them together in a crowd of over 50 people that was a Silver Anniversary of the Houdini's. We thank that person for this picture. 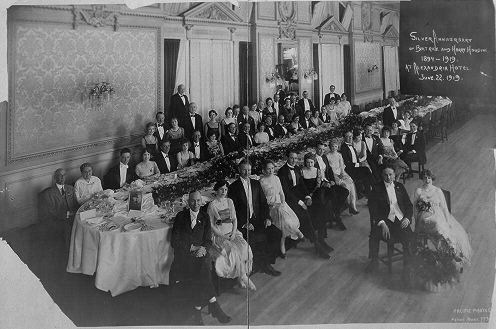 Not sure what links the guests together, but we were told by a friend they believe it may have been at a magic club. Dunninger is the third man from the left in the front. Not sure who he woman with him is. If anyone knows anything about this picture, please email us. Dunninger is one of the guests in the background with Houdini and his wife posing in the forground. If anyone out there has one of Houdini and Dunninger posing together, not as part of a large group, please send us a copy. The only one of them we have ever seen not in a group is one faked showing Houdini and Dunninger in the same photo. In this Houdini was superimposed from another photo we have in our collection when a fake medium confessed and posed for the same full length shot. This interesting photograph in our collecion is also autographed by Dunninger. There may be a few letters between Houdini and Dunninger and Dunninger did have pictures taken with Houdini's wife, after Houdini died, when he befriended Bess. He wrote several books using Houdini's name and full of photographs of many from the era but not one of him and Houdini. He also told stories after Houdini's death of private conversations they had, which of course could not be verified. We also have a picture of Dunninger with Chrystal, as well another article about them. Dunninger also was a consultant for the Tony Curtis movie "Houdini." Although a great movie, it had much misinformation about Houdini that lives on today. Dunninger even penned a book "teaching" people how to improve their "powers" so they too could read minds. This a great difference between Houdini and many others who do unbelievable feats. Houdini never made supernatural claims, and made it a point again and again. Houdini worked hard to dispell these ideas much to his credit, and is yet another reason for his status as a great legendary figure.

The Houdini Museum has been In Scranton for 10 years, and open to the general public for four years in the Scranton/Pocono area. Prior to that a part of the exhibit was on display for 13 years at the famous Magic Towne House in New York City. The Magic Towne House was the location of the Houdini Seances held in New York City, where Houdini lived most of his life. Many famous magicians attended including Milbourne Christopher and Walter B. Gibson. According to Walter Houdini's wife asked him to carry on the seances and Walter, asked magician Dorothy Dietrich to carry them on as a tribute to Houdini on several occasions before he passed away.

Houdini never said he was coming back, or that he would open handcuffs, etc. He was the exposer of the very people who claimed they could get messages from your dead relatives, make their ghosts appear, etc. He said such things were in his experience not possible, but being the greatest escape artist/magician that ever lived he, Houdini, would try to escape from the beyond. After ten years of no results his wife Bess sent out a letter to participants saying "since the failure of the ten year TEST, it is my opinion that all concerned have struck a mighty world wide blow at superstition."

Go to Articles about past "Houdini Seances"

Laws in PA. protecting consumers fraud and swindles by agents and bookers.
Go to

Information about the Lackawanna County Stadium 3 ON 3 Basketball Shootout July 13-14.
Go to

© 1993-2005 by The Houdini Museum. Except for reviews, no part of any of this document may be reproduced in any form, without written permission by the authors. The graphics have been retouched, computer enhanced and resized by the authors.
"