FAME
Many of todays top magicians started with a small organisation known as FAME. This includes one of our own magician Dick Brookz, who is considered one of America's best magicians for all kinds of events from children's birthday parties for all kinds of kids, even those of celebrities, to walk around and stage shows for families, adults and corporations.
Go to

The S.A.M. and Houdini
The Society of American Magicians started with 13 men in New York City in the back room of Martinka's Magic Shop, a store that Houdini would eventually own for a short time. Houdini sent in his application from Europe. Houdini was officially initiated in 1904 upon returning to the states. As part of the ceremony Houdini escaped from a pair of handcuffs that would thereafter be on exhibit in the shop. The SAM was organized May 19, 1902, and incorporated in New York, April 3, 1908. In 1904 it would begin to accept members from throughout the world. In June of 1908 he was elected Vice Preisident. He dropped out for a short time. Then being the most famous mystery entertainer in the world the Society of American Magicians recognized the fact when in April of 1912 he was unanimously elected hm an honorary member. In 1916 other branches were encouraged to be added. When Houdini joined he began to promote it throughout the world and was eventully elected president for some 9 years. Houdini was elected president June 2, 1917. He immediately started to inaugurate other Assemblies. He personally arranged for spcial meetings and paid all expnses; rooms in hotels, stenographers, refreshments and minor banquets. He even took time to write their monthly journal. He also left quite a bit in his will to the SAM and put their crest on his grave site. It grew to about 2,000 members and has not gotten much bigger. By 1927 it grew to 17 assemblies.

The society was basically for adults, with youngsters not being able to join.

In the 1950's the then members decided the name of the club was childish and changed it to FAME (Future American Magical Entertainers) and included Dick Brookz, Ken Silverman, John Hope, Richard Bangs, Al Callus, David Levy, Burt Kaplan, Jeff Spiller, Dan Ritchard, Mike Eberton, Melvin Kelger,Sheldon Weiner, Mike Goldstein, Leonard Heller, Kichi Iamoto, Hank Lifson, Jerry Goldstein and many others. (see official 1952 roster below) At that time it was run by Antoinette Deutch, Bob White, and Lou Dick. The acronym FAME came about when the members decided the Peter Pan name was a bit childish, especially after a comment from comedy magician Carl Ballantine, "I love your peanut butter". The FAME acronym was suggested by Dick Brookz. Now youngsters can join a new organization, SYM (Society of Young Magicians), which is a branch of the SAM. (Society of American Magicians)

Dr. Abraham Hurwitz, also known as Peter Pan the Magic Man, originally headed up the club. Hurwitz was a Yeshiva University education professor who was so deft and admired at his magic act that he was named New York City's "official magician" by Mayor Fiorello La Guardia. 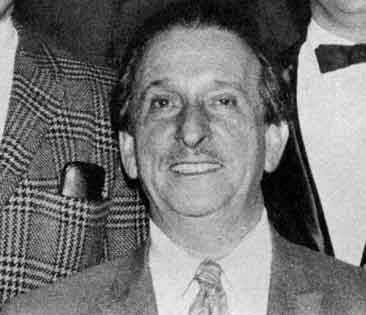 Dr. Hurwitz was a city recreation director when Mayor Fiorello La Guardia gave him the official magician title during the Depression. For 18 years, he took his magic show to schools and recreation centers and put on annual magic shows in parks in every borough. For years after he left the department he continued his magic shows as a volunteer. Among his proteges was his daughter, Shari Lewis, the world famous ventriloquist and developer of Lamb Chop.

Abe Hurwitz was born in Lithuania in 1906. He graduated from City College of New York, got his master's degree from Columbia University and his Ph.D. in educational guidance from New York University. He began mixing magic with teaching as a guidance counselor at the Brooklyn Hebrew Orphanage. He retired from Yeshiva in 1974. He died September 29, 1981.

More bio and FAME info:
Whaley, Bart. Who's Who in Magic, An International Biographical Guide From Past to Present. Wallace, Idaho: Jeff Busby Magic, Inc., 1991.
"Obituary: Abraham Hurwitz Dead at 76; New York's Official Magician." The New York Times 1 October 1981: Section B; Page 12, Column 5.
Thanks to magician and former SAM President George Schindler for his help in accumulating and checking the accuracy of much of the information on this page as well as supplying several pictures.. 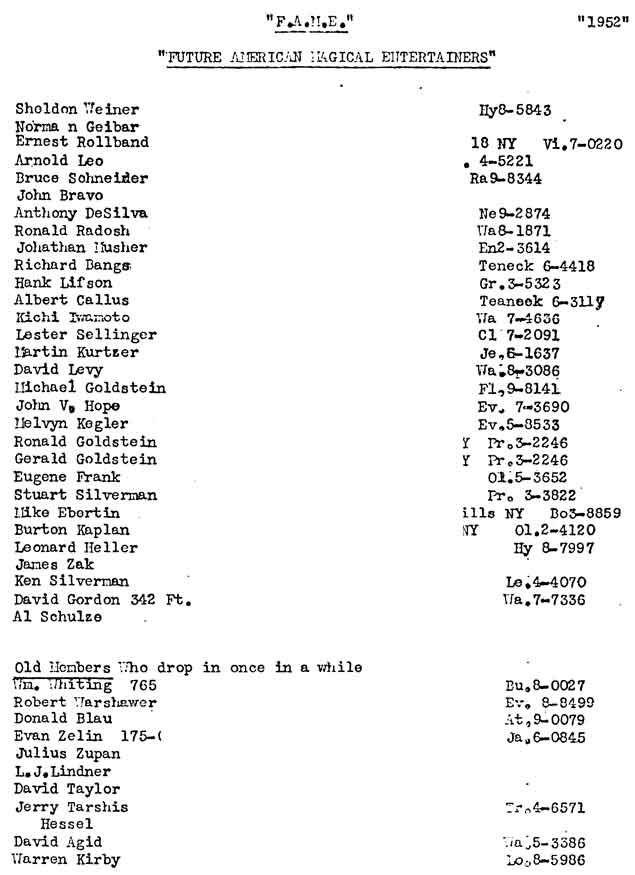 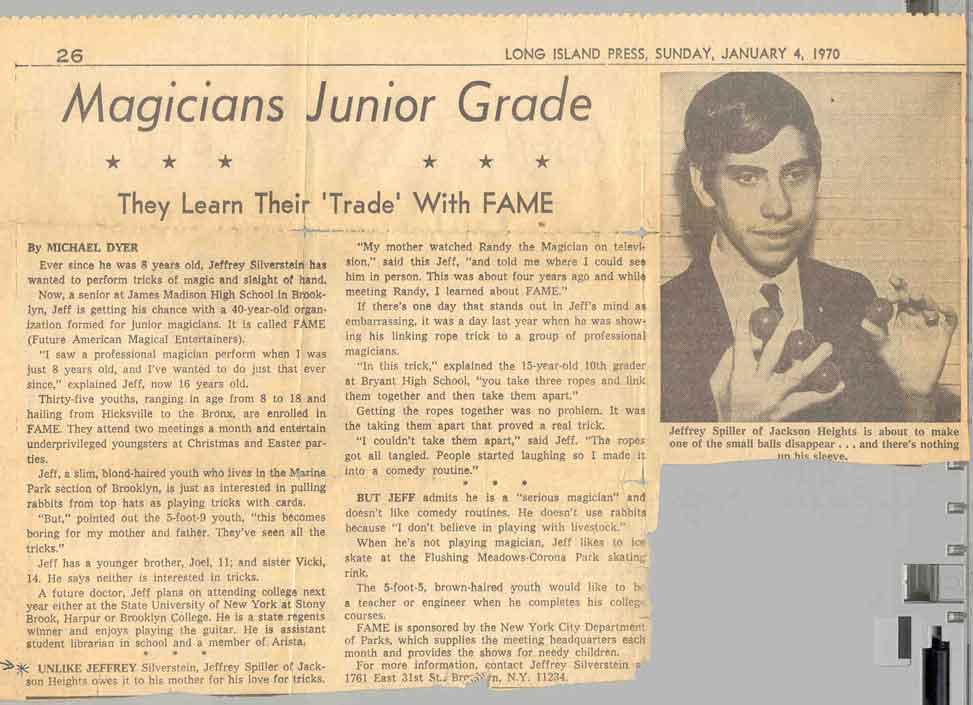 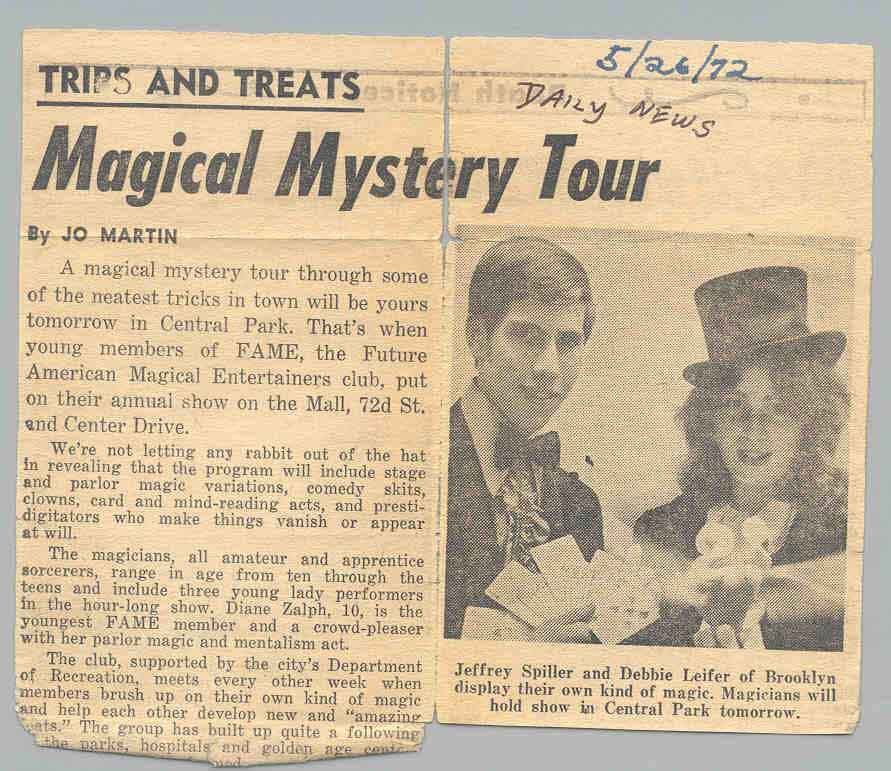