Our eternal thanks to Edward and Adelaide Connell of Florida for these and other wonderful pictures of the grave site.

There is a never ending interest in Houdini's Grave site.

He is buried in a gravesite in New York City which was his home for most of his life. The grave is across the river in Queens, near the Brooklyn border. It is very private and none are allowed unless they are related. Hence, we do not put the address. There has been vandalism, publicity stunts by magicians and others at the grave site.

His entire family is buried at the grave site, mother, father, sister and brothers, etc. 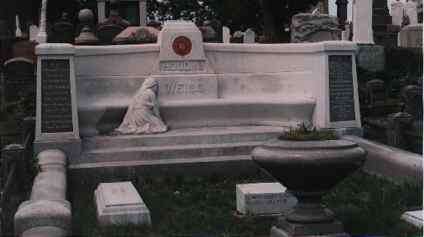 Here at his grave site you see his chosen name Houdini and his real name, Weiss. He left a large sum to the Society of American Magicians, the equivalent of about $40,000.00 in todays currency. The bronze colored round crest in the center top of the grave site monument is the crest of the Society of American Magicians. Make no mistake about it Houdini loved magic and magicians. 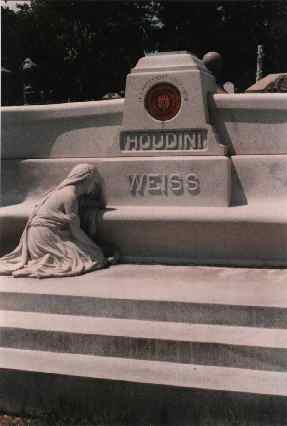 He left his gigantic collection of books on theater and magic to the Library of Congress for future generations to study, rather than sell it for personal gain. It is worth millions.

His wife is not buried there. There is a spot for her as you can see her name on Houdini grave stone below, but her family did not want her buried there after she died for religious reasons.

She did want to be buried in the same grave with Houdini.

We have a copy of his will in our collection.

© 1993-2005 by The Houdini Museum. No part of any of this document may be reproduced in any form, without written permission. The graphics have been retouched, computer enhanced and resized by the authors.
For memberships, donations, etc. email


However until we get more members, we do not have the funding to email as much as we would like to. We do answer members questions where possible. Please become a member, get your certificate, pin, etc.