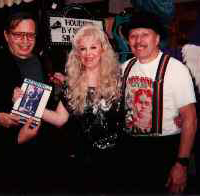 "Ask the guy next to you on the bus to name a magician, and 9 times out of 10 he'll say, "Houdini." Seventy years after his death, Houdini still whips the competition. What kind of man does it take to turn a vaudeville magic act into a profound cultural symbol? This question is at the heart of Kenneth Silverman's "Houdini!!! The Career of Ehrich Weiss."

"remarkable achievement. To uncover so many previously unknown details of the master mystifier's life would be enough to merit applause. To examine Houdini and his world with such originality and depth deserves a standing ovation."

Houdini's beautiful posters-copies are available from the museum.
Go to

6 Houdini train pictures including his last ride after he was killed.
Go to

Not too well known facts about Houdini.
Go to

Some Houdini challenges in the area.
Go to

Houdini's brother Hardeen and other magic history
Go to

Houdini's exposure of psychics, mediums and other frauds.
Go to

Local writer writes of seeing Houdini many times.
Go to

Ads for Houdini's movies in Scranton.
Go to

Articles about our past Houdini Halloween "seances"
Go to

Go to "Houdini Halloween Seance" on the Web!
Go to

Daily October Halloween Shows at the Houdini Museum
Go to

About the Houdini museum and tour.
Go to

Museum Information for GROUPS, FIELD TRIPS AND SHOWS.
Go to

Home Page of John Bravo (Bravo The Great aka Dick Brookz), well known magician and a director of the Houdini Museum

© 1993-2005 by The Houdini Museum. No part of any of this document may be reproduced in any form, without written permission. The graphics have been retouched, computer enhanced and resized by the authors.
For information email